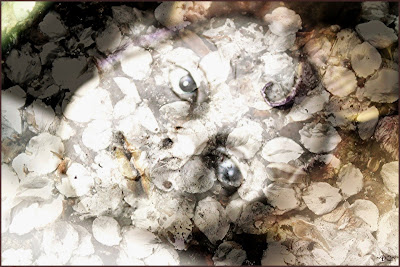 Flower-clad, she slipped
Her longing-filled limbs
Into the stream.
Some say
She was still singing as
Sweet lips submerged,
Her fine face framed
By long silk strands like
Cupid’s-grin ripples
That drifted
Slowly downward,
Surrounded by
The poison petals
Of lost love.
With her last breath
She exhaled his name.
There. Look.
Such a picturesque tribute
To the sunken depths
Of a broken heart
And of hope, drowned.
Posted by Donna~Q~ at 1:04 PM 5 comments: 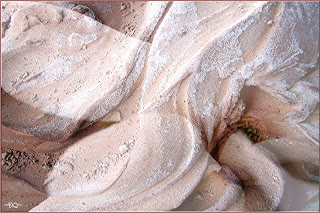 You sway in spring breezes,
A soft-petal shimmy,
Sun-cloaked and shining
With the colors of rebirth,
While down, deep down
In soil-shod secrecy
Your roots twist their way
Around the white bones of winter.
Posted by Donna~Q~ at 11:45 PM 11 comments:

April plays a fickle game,
Rain or sun? You never know.
Yesterday it looked this way:
As above, so below: 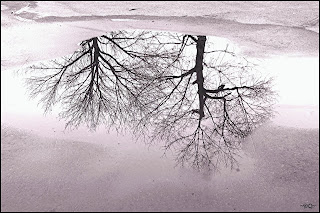 And then it changed,
As April does,
Today was this:
Springtime bliss: 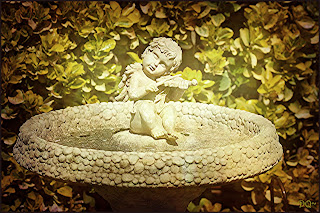 In the Garden of Your Springtime

In the garden of your springtime
I search for green and
Your palette never fails to please.

(I love the purples too.)

In the garden of your springtime
So many things reflect the color of the sun,

And even rain shines
Like a liquid kiss that whispers… *grow*

Everywhere there are signs of new beginnings

And I feel renewed.
In the garden of your springtime
The whole world shimmers with possibilities…
﻿
Posted by Donna~Q~ at 1:02 AM 11 comments:

A little over a year ago, I decided to explore tribal bellydance. I didn’t know a lot about it when I first wandered in to observe a class at Tribal Bellies Studio, but I was instantly drawn to the earthy, sensual and strong-but-still-feminine movements. Soon classes became an enjoyable part of my weekly routine. Last Sunday, dancers from a variety of levels at the studio got together to do a flashmob in Philadelphia.

Afterwards, we compared notes on the comments we had heard from the onlookers. The one most often repeated was “that had to be choreographed.” But it wasn’t.
The label of “tribal” refers to several aspects of this particular dance form. The first is the amalgamation of influences and styles that inform both the music and movements. The second alludes to the fact that the dancers work as a community (or tribe) to develop a shared vocabulary of moves and cues, and that in turn allows for spontaneous improvisation in casual settings as well as public performances. In the video above, my teacher, Vikki, is leading the dancers, but usually the leadership position is rotated throughout the group and thus each individual becomes a participant in a communal act of creativity. 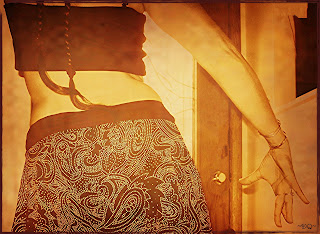 On a more personal note…
My mother was a singer, and I grew up in a home that was filled with song, always.  Musicals were also a stock part of the household. I spent a number of my formative years believing that people habitually burst into song and dance as a means of communication and self-expression, so being a part of last weekend’s flashmob felt very much like an extension of my upbringing.
I also enjoyed taking dance to the streets because a good part of my philosophy on art revolves around the idea that it is one of the things that can initiate a sideways step away from the mundane and into the magical, in terms of both creation and response. Oliver Hunter’s short essay, “On life, art and magic” (found towards the bottom of this link) eloquently expresses a similar sentiment. I've long been an admirer of his artwork and, because it is now National Poetry Month, I'll leave you with a postcard (via the archived Endicott Studio) that combines one of his paintings with a quote from one of my favorite poets, John Donne: 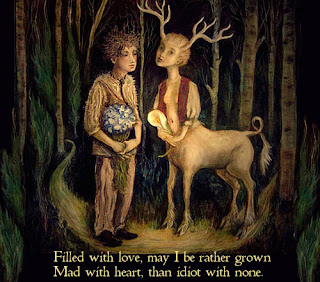 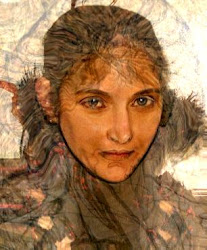 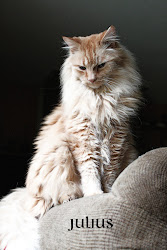 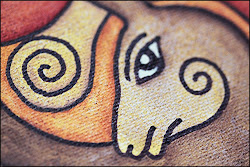 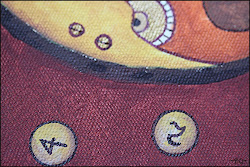 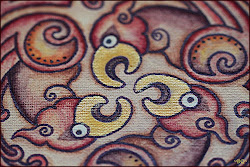